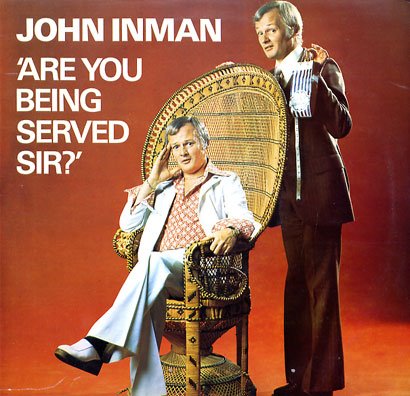 With the recording of the one off episode of Are You Being Served coming up next week in Manchester I thought it might be a good time to talk about the character of Mr Humphries.   There has been some conjecture in the press about how the character of Mr Humphries will be played (by Jason Watkins) and indeed how he has been written (by me) for this new one off episode.   When writing the show I had no worries at all about how to handle Mr Humphries (if you’ll celebrate the pun).  To me he was a joyous, positive, happy character who enjoyed his work and was popular with his colleagues;  he was also the stand out character in what was essentially an ensemble show.  It was interesting to discover, during my research for the show, that the only big name in the original AYBS was Trevor Bannister, hot from his smash hit sitcom ‘The Dustbinmen’ although he was soon to be outshone by the popularity of the character of the camp, mummy’s boy Mr Humphries played with impeccable comic timing by John Inman.    There is of course the argument that Mr Humphries was an object of ridicule and a stereotype of a gay man.  I think this argument has changed dramatically.  In the closeted, repressed 1970’s there were no visible gay men on television, just a few very camp, seemingly asexual middle aged men.

We are in a completely different time and because of this I see Mr Humphries as a charming, popular, hilarious sitcom character who happens to be gay.   Yes, there, I’ve said it, the one thing the original writers and John Inman always denied, Mr Humphries, in my opinion, is unequivocally homosexual.  And the denial of this was the only thing which ever offended me about the character, not that he came to work dressed as a sailor, that he rejoiced in helping male customers try on dresses or that he wore his mother’s wigs on his lunch hour to treat her to a shampoo and set.

For me the problem was the very denial that this fictitious character or his real life contemporaries (Larry Grayson, Kenneth Williams, Frankie Howerd,etc) had any kind of sexual identity, making them safe and non confrontational for a 1970’s audience, which often meant the people were laughing at them and not with them.    In fact, thinking about it, Mr Humphries was the most daring and progressive of all of these camp characters, getting far closer than any of his contemporaries (either real or fictitious) to admitting he enjoyed ‘the company of men’.  Also Mr Humphries was never portrayed as a victim, he didn’t have a tortured life, quite the reverse, he obviously loved his work with his equally eccentric colleagues, had a wonderful home life with his doting mother and clearly had a very busy and thriving social life outside of the Grace Bros department store.   Although I think it was wrong of David Croft and Jeremy Lloyd (and John Inman) to deny Mr Humphries’ sexuality, I think they made a great job of the relationship between him and his co-workers, especially Mr Lucas.  Mr Lucas never had a “backs to the wall” type of attitude towards Mr Humphries, they made fun of each other, as work colleagues often do, but it was never unkind, malicious or bullying.   So, maybe now is the time to celebrate Mr Humphries and stop apologising for him being colourful, eccentric, unconventional or indeed gay.