After a month or so being back in London it’s been great to catch up with the latest shows.  I love living in Spain half of the year but I do miss the social and entertainment opportunities our exciting capital has to offer; although the last three or four shows I’ve seen have had me feeling quite conspicuous walking in flats…

Last night my friend Jo and I went to see Kinky Boots, the musical spin off from the 2005 hit movie about Lola, a drag queen who comes to the rescue of Charlie, a straight laced shoe factory owner whose business is going down the pan.  It’s a fun, colourful couple of hours with great performances, good laughs and amazing costumes; it all ended with a very happy Adelphi audience standing on their feet, clapping and singing along; you can’t for ask much more than that.   Talking about ovations, I’ve never heard an audience cheer and scream quite so much as they did for Richard O’Brien in The Rocky Horror Show the other week.  Taking the part of The Narrator in his own show he toyed and teased the screaming audience sending them into a transational frenzy with a quick flick of his non existent eyebrows.    As this wasn’t enough men in frocks for one month I also saw Harvey Fierstein’s  latest offering, ‘Casa Valentina‘, a play about crossdressing in the Catskills.  On the face of it the subject matter seems camp and frivolous (and there are some wonderfully camp and frivolous moments) but attitudes towards homosexuality in 1950’s America is an interesting one, especially from a group of white collar heterosexual men who spend their weekends on a mountain retreat dressing as women.

But my absolute favourite helping of colourful, crossdressing camp has to have been a few weeks ago in Leicester for the press night of the UK touring production of Hairspray.  Benidorm’s very own Tony Maudsley shone as 6ft 8″ Edna Turnblad, mother of Tracey Turnblad, a 1960’s backcombed Baltimore teenager on a mission for fame and to integrate her favourite TV programme The Corny Collins Show.  I know I’m biased because Tony is a very good friend of mine but he was absolutely wonderful, an honest, truthful (and hilarious) performance which I urge you to see; and you can!  Hairspray is on tour and coming to a theatre near you, check the link for all the dates.

Now, after all that cross dressing, high heeled hilarity I think it’s time to exert my manhood and spend my time doing something  butch and manly; oooh, just remembered I recorded last night’s Great British Bake Off Final – FABULOUS! 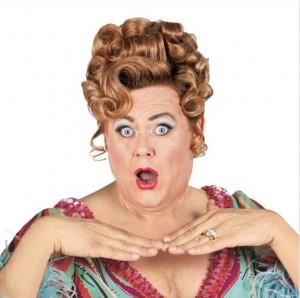 Benidorm’s Tony Maudsley in The National Tour of Hairspray